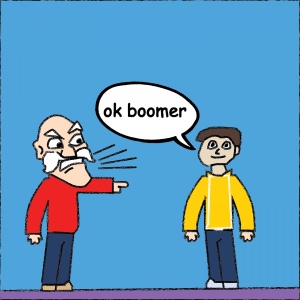 The end of the decade brought forward a new catchphrase: “OK Boomer.” It’s meant to be humourous, but its real meaning is dismissive and insulting to the older generation. It is something a younger person would say to an older person in a sarcastic and mean way. It pits the younger generation against the older generation. This term exploded on the social media video clip site called TikTok and is now sweeping the nation.

In between the Boomers and the Millennials is Generation X. That’s my generation. Those who are Gen Xers now are around 40–54-ish. Generation X is often forgotten about. It seems like we are invisible. Not young, but not “old.” It is kind of like the middle-child that often gets forgotten.

Each generation tends to point fingers at the next. I say we need to embrace each generation. Learn from what each has to offer.  Boomers are those born between 1946 and 1964. They are aged 55-73.

In order to move forward in a united front, we have to stop saying “OK Boomer,” and instead say, “I hear you. I see you. Let’s talk.” We have so much to learn from each other. Gen Xers now approaching that magical 55+ age. That age when we get a senior’s discount. We are almost there. I don’t want to be dismissed with “OK Gen Xer.” Just as much as the younger person doesn’t want to be dismissed with “OK Kid.”

So, what do you think of the term, “OK Boomer”? Is it just a recycled and new way of dismissing the older generation? Ageism rearing its head? Or is it nothing new and harmless?